Laboratory tests are meant to identify the tissue removed as benign or cancerous, and to detect the extent to which the cancer has spread. Doctors usually take a decision about which breast cancer treatment is to be given, based on the biopsy report. There are different post-surgery tests, but the laboratory tests in this section are performed before surgery.
There are two types of laboratory tests:
1. Histopathological tests: these tests refer to the microscopic examination of the tissue that is removed, in order to study the changes caused by the disease.
2. Biochemical tests: these refer to blood and urine tests related to surgery, chemotherapy and overall metabolism.
Following are some of the histopathological tests performed:
a) Hormone receptor status:
This laboratory test is an immunohistochemistry-based test. These tests are conducted to determine whether there are hormone receptors present on the surface of the tumour cells.
Oestrogen and progesterone are the two most important hormones governing a woman’s body and health. These two hormones attach to protein receptors present on the cell surface, and accelerate cell growth, in normal as well as some cancerous breast cells. About 2 in 3 breast cancer tumours have receptors for these hormones on their cell surface. Therefore, the biopsy tissue samples should be tested for the same.
If oestrogen receptors are present, then the tumour is referred to as ER positive (ER+) cancer, and if progesterone receptors are present, it is referred to as PR positive (PR+) cancer.
If the tumour cells are positive for the hormone receptors, then hormone therapy is given to the patients. 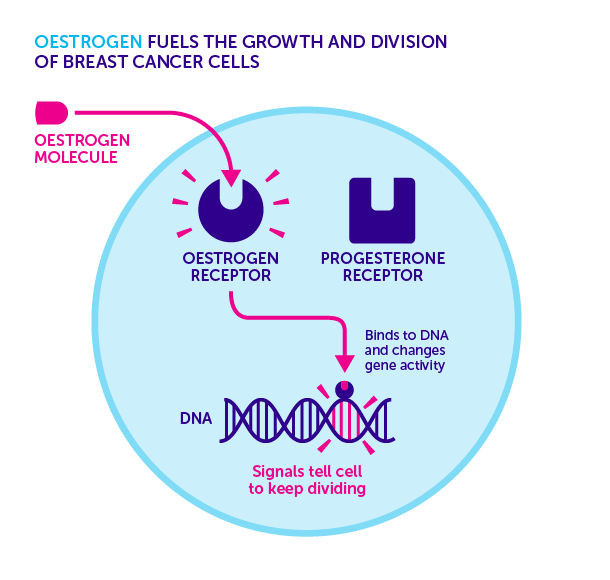 b) Human epidermal growth factor receptor 2(HER2)/Neu status:
This receptor has an important function in normal cell growth and differentiation. However, HER2/Neu proteins are sometimes found in breast cancer cells as well. In about 1 in 5 breast cancer cases, the cancer cells have a gene mutation that results in excess production of these proteins. This in turn, promotes the growth of the cancer cells.
HER2 positive tumours are more aggressive and spread faster than ER/PR positive tumours, and are prone to recurrence and poor prognosis. The HER2 gene, that is responsible for production of HER2 proteins, is also associated with ovarian and stomach cancer.
Targeted treatment against HER2/Neu protein can improve the outcome in breast cancer patients who are positive for these protein receptors. 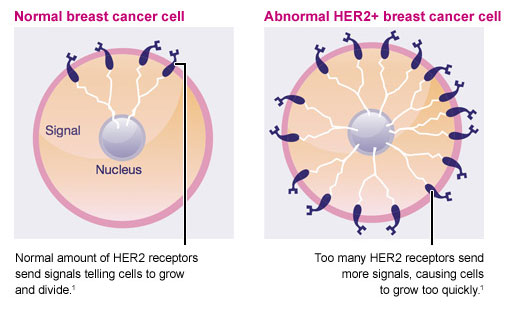 c) Ki-67 test:
Ki-67 is a cancer antigen. It is found in growing, dividing cells, but not in cells that with halted growth. This makes it a good marker of breast cancer and can predict the aggressiveness of the cancer, as the cancerous cells rapidly grow and divide. This test measures the level of Ki-67 production in cancer cells.
Based on the Ki-67 levels or score, the doctor can determine the breast cancer prognosis
d) Fluorescent In-situ Hybridization (FISH):
FISH test maps the genetic changes in cells responsible for affecting the quantity of proteins produced. Changes in production of cell proteins can lead to cancer.
FISH test is advised by the doctor if the breast cancer tumour is diagnosed as HER2/Neu positive. This test is done on the tissue sample obtained by biopsy to see if the cells have extra copies of the HER2 gene. An increased number of copies of the HER2 gene indicates the increase in presence of HER2 receptors. HER2/Neu proteins attach to these receptors and stimulate the growth of breast cancer cells.
This test further helps in deciding which treatment is to be given to the patient.
e) Genetic tests:
Genetic tests are conducted to diagnose the risk of breast cancer in a woman with a strong family history.
There are two types of genetic tests:
i. Germline testing – to detect the presence of BRCA 1- and BRCA 2- associated hereditary breast and ovarian cancer syndrome (HBOC) in the germ cells
ii. Somatic testing – to identify actionable mutations causing breast cancer, against which targeted chemotherapy can be used. It is usually done when first-line chemotherapy is not responsive.
Germline testing: Germline testing is done for breast cancer risk assessment and risk prediction, and to check the risk to the family members.
BRCA 1 and BRCA 2 genes are the best-known genes linked to breast cancer risk. This test is used for their detection.
BRCA 1 and 2 genes are naturally present in every cell, but some people have a mutation in one or both the genes, thus increasing the risk of suffering from breast cancer, in both men and women. BRCA 1 and 2 mutations can be inherited from either parent.
BRCA 1 carriers have a 60% chance of developing breast cancer by age 70, and an increased risk of developing Triple Negative Breast Cancer (TNBC). TNBC is HER/ER/PR negative cancer, and is worse than ER/PR positive tumours.
BRCA 2 carriers have about 45% chance of developing breast cancer by age 70 and tend to have ER positive tumours.
Germline testing is recommended to determine a person’s BRCA 1 and 2 status, following which, genetic counselling is advised.
2. Biochemical tests are blood tests and urine tests done for checking the presence of cancer/tumour markers, to detect cancer activity in the body. For example, CA 15-3 test is a biochemical test to detect the presence of CA 15-3 cancer antigen. This antigen is produced by regular breast cells. In many people with breast cancer, there is an increased production of CA 15-3, which enters the blood. Blood tests can then be done to measure the levels of CA 15-3. The higher the CA 15-3 level, the more advanced the cancer. These biochemical tests can thus help in determining further treatment of the patient.